The sustainable food production of the future 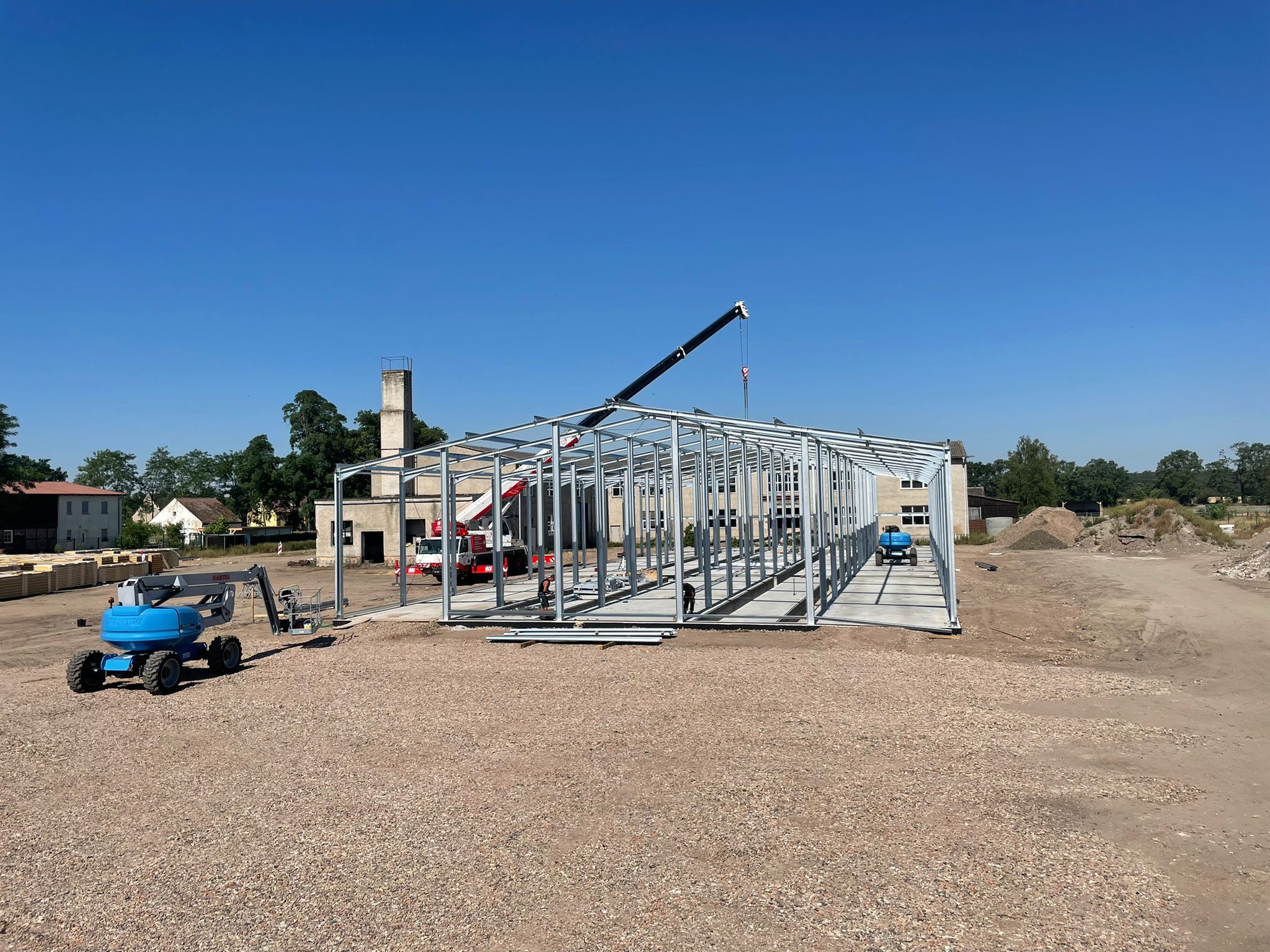 BEL BioEnergieLand GmbH is building Germany’s first large-scale vertical indoor farm for the production of fruits, vegetables, fresh herbs and lettuce in the state of Brandenburg. Its construction will be completed by the end of the year. In this innovative and state-of-the-art indoor farm numerous plant species will be produced vertically all year round. By using an aeroponic (soilless) system and climatization the plants will be cultivated in optimal conditions. The successful progress of the construction of the vertical indoor farm will be celebrated in form of a topping-out ceremony the 30. June 2022 in Bienenfarm, in the district of Paulinenaue, Germany.

“We are currently building our prototype. This so-called BEL Climate Chamber will be 54m long, 22m wide and 8.4m high. Here we are demonstrating for the first time vertical plant cultivation on an industrial scale. This vertical indoor farming Climate Chamber and an adjacent building will be used in future as our so-called BEL Competence Center. It will be used for research and development and we build an education center in which the future operators of further BEL Climate Chambers will be trained.

The next BEL Climate Chambers will be much larger and will have a length of 122m and a width of 34.5m. In such vertical indoor farms there will be enough space for eight shelves with 90m length, each with – depending on the plant species – up to eight levels in which the plants will grow. This gives us 11,500 square meters of growing space in one climate chamber.”

Ms. Shahnaz Horvath, co-founder and CEO of BEL adds: “Compared to conventional agricultural production we can harvest up to 300 times more on the same base floor area. With our unique production method, the plants grow faster; at the same time, we use far less water.

For the energy supply we use solar power in combination with modern energy storage systems. We not only focus on the production of lettuce and herbs, as it is typical in the vertical indoor farming field. With our vertical indoor farms, we can also produce important staple foods like potato and rice worldwide.”

At last Dr. Riesbeck says: “After years of research and development we are very much looking forward to the topping-out ceremony and the invited guests and that our first BEL Climate Chamber will become operational at the end of the year!”

Among others the ambassadors of Uzbekistan, Kuwait and Egypt are invited to the topping-out ceremony. There is already strong interest to establish BEL’s vertical indoor farms in these countries. Further guests include numerous political, economic and financial representatives from Berlin and Brandenburg. Dr. Riesbeck will give the opening speech together with Mr. Kayumov, the deputy ambassador of Uzbekistan; Dr. Saule, the CEO of the Economic Development Agency Brandenburg (WFBB); Mr. Koch, the alderman of the administrative district Havelland; as well as Prof. Faltin, professor for entrepreneurship at the Freie Universität (FU) Berlin.

Funding of the project by the EU and the state of Brandenburg:

The vertical indoor farm was developed by an interdisciplinary team in cooperation with the Humboldt University of Berlin and partner companies. The construction of the Vertical Indoor Farm is funded by ProFit Brandenburg (Funding of Research, Innovations and Technologies in the state of Brandenburg) and co-financed by funds from the European Regional Development Fund (ERDF). This makes it the second-largest economic development program in the state of Brandenburg after the Gigafactory in Grünheide.

BEL is planning to build 60 vertical indoor farms (112.5m*34.5m*10.50m) in eastern Germany. Among others, locations are planned in Saxony-Anhalt and in Brandenburg in the district of Märkisch Oderland and in the Havelland. Further inquiries come from Berlin, Bavaria and North Rhine-Westphalia. The first license agreements for the construction of further BEL climate chambers in Egypt have already been signed. The food production of the future has already begun.

BEL BioEnergieLand GmbH is a technology start-up founded in July 2020. It contributes with its products to the achievement of the Sustainable Development Goals of the United Nations (UN). It markets its site-adapted vertical indoor farms worldwide and enables its customers to produce any plants they wish in a sustainable way. Its customers are food retailers, the food industry, farmers and the pharmaceutical industry. For more information, visit: https://www.bioenergieland.com

This website uses cookies to improve your experience while you navigate through the website. Out of these, the cookies that are categorized as necessary are stored on your browser as they are essential for the working of basic functionalities of the website. We also use third-party cookies that help us analyze and understand how you use this website. These cookies will be stored in your browser only with your consent. You also have the option to opt-out of these cookies. But opting out of some of these cookies may affect your browsing experience.
Necessary Always Enabled
Necessary cookies are absolutely essential for the website to function properly. These cookies ensure basic functionalities and security features of the website, anonymously.
Functional
Functional cookies help to perform certain functionalities like sharing the content of the website on social media platforms, collect feedbacks, and other third-party features.
Performance
Performance cookies are used to understand and analyze the key performance indexes of the website which helps in delivering a better user experience for the visitors.
Analytics
Analytical cookies are used to understand how visitors interact with the website. These cookies help provide information on metrics the number of visitors, bounce rate, traffic source, etc.
Advertisement
Advertisement cookies are used to provide visitors with relevant ads and marketing campaigns. These cookies track visitors across websites and collect information to provide customized ads.
Others
Other uncategorized cookies are those that are being analyzed and have not been classified into a category as yet.
SAVE & ACCEPT
Powered by